A few nights ago in Montreal about a hundred people gathered to show their support for Pussy Riot, the Russian punk band currently imprisoned for performing their punk prayer (Mother of God, Chase Putin Out) in a Russian Orthodox church in Moscow. Check out this photostream for some images of the demo. Other cities have held similar protests outside their Russian embassies, demanding the release of the three women. 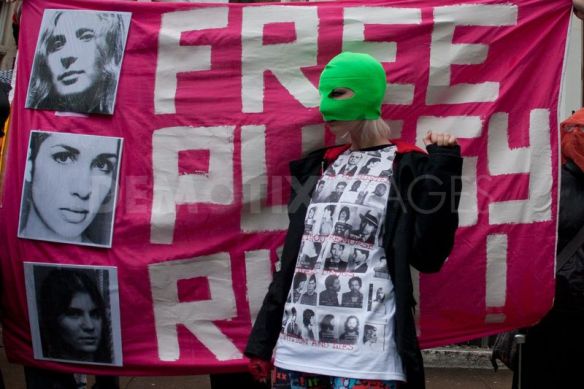 We’re sad and angry that these women face a possible sentence of seven years in prison, and that their trial is unfair and their present imprisonment borders on torture. We hope the international outcry will continue and gain strength, and we want to do what we can to help them get free.

Women often bear the brunt of repressive regimes, and so are often at the forefront of revolutionary movements. We’ve seen it in North Africa and the Middle East, and we’re seeing it here. Let’s not downplay their courage and rage by saying “it’s just music, it’s just art, it’s harmless.” From our perspective, their actions might warrant a slap on the wrist, but the reaction of Putin’s government suggests that more is at stake. We dearly hope this is a spark that sets off something big. From one feminist collective to another: Venus is with you, Pussy Riot! Liberez Pussy Riot!